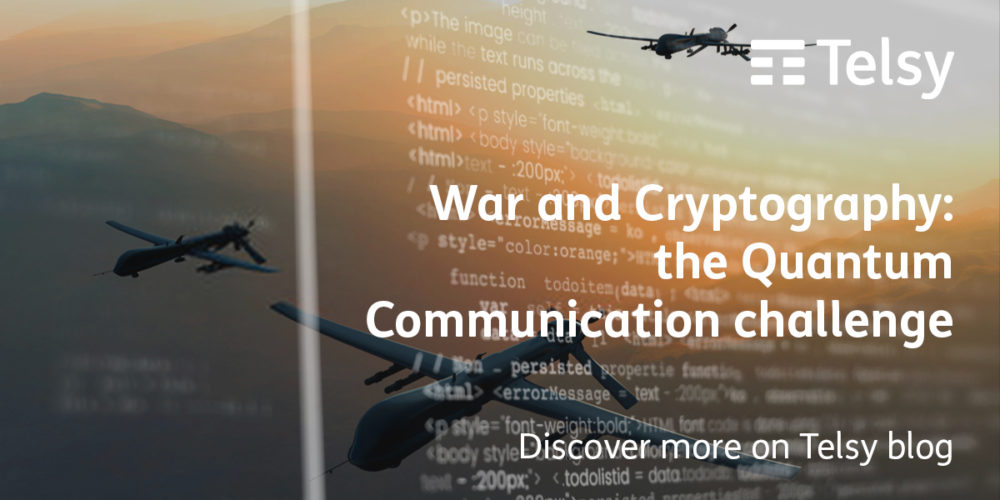 Message encryption has always been a very important tool within the military, stretching back to the time of the ancient Greeks to the present day. It is natural for two armies in war to seek information about each other, both to learn about enemy strategies before battle, as well as to discover its movements during it. In order to obtain this information, “cryptoanalysis” was born, that is the study of decrypting encrypted messages without knowing their encryption key. It is easy to assume that if an army, through cryptoanalysis, manages to decipher the enemy’s communications, it can gain a fundamental strategic advantage.

To be precise, it must be specified that the term “war” today must be understood in a broader sense, given that is increasingly appropriate to speak in terms of “commercial”, “hybrid” or information war. It is also for this reason that, even in recent decades, the need to violate the cryptographic algorithms of rival countries led to a relentless race among mathematicians, both to create increasingly complex algorithms and to try to break them. This challenge has changed radically in recent years, thanks to the emergence of a revolutionary new technology: “Quantum Computing“.

The principles of Quantum Mechanics

In a nutshell, when one speaks of “Quantum Computer”, it refers to a new type of computer, which exploits the principles of Quantum Mechanics to be able to perform operations and process information. In fact, in order for it to work, the Quantum Computer does not use ordinary bit, but rather the “qubit” or “quantum bit”. Whereas the traditional bit can only manifest itself in two distinct values, 0 or 1, the qubit can be found in a quantum “overlap” between the two states “0” and “1”.

This combination, or the principle of superposition of states, allows one to expand the coding of information, exponentially increasing the computational capacity. In fact, the superposition principle states that two or more “quantum states” can be added (superimposed), generating a valid quantum state. Furthermore, each state is the sum (superposition) of several quantum states.

Based on these principles, very complex systems have been built, aptly named “Quantum Computers”. The first implementation of a system of this type dates back to 2001, when IBM developed the first 7 qubit quantum computer.

The race for quantum supremacy

The following years saw the start of what could be defined as “the quantum race” between the world powers, in which everyone sought to gain a strategic advantage over others.

Although there are many possible applications for quantum computers, the driving force behind this technological effort is for its use in to be found in the cryptographic field, especially with regard to cryptanalysis. In fact, the enormous computing power of the quantum computer would allow one to decipher most of the codes used today with great speed.

Like any technology, however, these tools can also be used by both attackers and defenders. In fact, through what has been called “Quantum Key Distribution” it is possible, using the principles of quantum mechanics, to generate encryption keys and distribute them in a safe way. This is because any measurement on a quantum system alters its state (uncertainty principle), consequently allowing the interlocutors to find out immediately if someone has tried to intercept the distributed key and then take the appropriate countermeasures.

The Chinese advantage in the field of quantum communications

Even if the current quantum scene is constantly evolving, China seems to be definitely ahead of other countries in the field of quantum communication.

In 2016, China launched the first quantum communications satellite, the Micius (a name derived from an ancient Chinese philosopher) into orbit. It is the first experimental satellite that is part of a much larger project called “QUESS” (Quantum Experiments at Space Scale), an international research project in the field of quantum physics. The objectives of the project are to bring an encrypted quantum network between Asia and Europe by 2020, and to extend this network globally by 2030.

Chinese scientists have recently claimed to have developed the world’s first fleet of drones for the “secure” transmission of information with quantum communication technology. The work, published last January in the National Science Review, is thanks to researchers from the University of Nanjing, in eastern China, who have developed drones capable of autonomously generating pairs of “entangled” light particles capable of carrying information.

The term entanglement in quantum physics refers to the mechanism by which, between two interacting particles, a bond is created that remains active even when they are removed, so that, when one of the two assumes a different state, this is replicated instantly on the other. It is one of the quantum mechanisms that make quantum key distribution possible and safe.

This system is particularly revolutionary, especially in the military field, because it is evident that the use of very small quantum communication devices, such as those mounted on drones (weighing 35 kg), allows a great variety of tactical uses that can ensure a significant strategic advantage. The next step will in fact be to conquer absolute security in data transmission, through a network of drones capable of connecting also with quantum satellites such as the “Micius”.

In any case, many other countries, primarily the United States, have not sit back and watched and are now trying to catch up.

Just think of the recent announcement in which Google claimed that it has developed a quantum computer capable of performing in 200 seconds a certain operation that would take the world’s fastest computer of today 10,000 years. Even though the specific case identified by Google is substantially devoid of practical utility and not easily extendable to other areas, it is undoubtedly telling of the rapid technological advances we are witnessing in the realization of quantum computers.

In fact, such vast computing power would seem capable of definitively putting an end to the mathematical cryptography to which today the security of encrypted communications is entrusted globally, but in reality many cryptographers are studying to develop algorithms capable of resisting these quantum computers. It’s the so-called “post-quantum cryptography“.

In Europe too, several research projects relating to quantum communication have recently been launched and Italy is playing a leading role, being equipped with one of the largest fiber optic networks on the continent: the backbone of approximately 1,800 km built by the INRiM, which connects Italy from Turin to Matera. Telsy itself is connected to this network and is participating in projects related to quantum technology.

Furthermore, the technology for quantum communication involves much more work in order to iron out some difficulties, such as, for example, what still presents itself as a necessary condition for the successful end of the transmission trough air, i.e. that the receiver and the sender are in visual contact. So it can be said that the road to a complete transition to quantum communication technologies is still long and the challenge in this sector will become increasingly intense in the coming years.