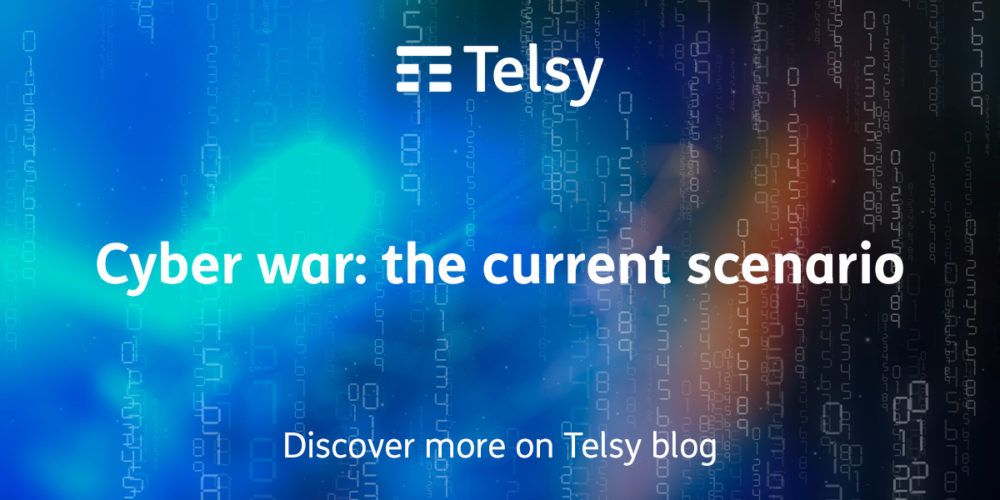 Lately we hear more and more often about “hybrid” or “asymmetric” war, terms intended to explain a military strategy that mixes conventional war, irregular war and cyber war with other indirect attack methods, such as fake news and accusations in the legal or political field. With the evolution of hybrid war as a form of low intensity conflict during peacetime, the “battlefield” has therefore expanded to sectors and organizations that had never been involved in war before.

In fact, today, world superpowers are often involved in low intensity conflicts that allow the forces involved to avoid getting caught up in traditional confrontation. The last front of the information war has made cyber war one of the most convenient tools for this type of conflict.

The various types of cyber threats

In the current Geo-political context, the overwhelming military superiority of certain large countries, in terms of conventional war, has strongly encouraged the smaller nations to adopt cyber warfare to achieve their goals. In fact, cyber warfare provides an economically viable means of asymmetric warfare that can hardly incur into a military response on the field by a much stronger power in terms of physical armaments. Cyber ​​attacks and cyber warfare are therefore becoming increasingly fundamental in the context of modern warfare.

When we talk about a cyber attack, we generally refer to the unauthorized intrusion into a computer or a computer network for devious actions such as tampering with services and infrastructure, data theft and infiltration of servers and data centers. The emergence and development of politically oriented non-state cyber-groups and other cyber-crime groups have made the current scenario even more complex. In fact, cyber attacks can today be divided into four macro-categories: cyber-terrorism, cyberwarfare, cybercrime and cyber-espionage.

A new way of fighting

It is believed that every one of the top 15 countries in the world (in terms of military budgets) are developing offensive and defensive cyber skills. In 2012, 114 of the 193 member states of the United Nations invested in cyber security, including 47 countries that had also started military cyber security projects. These states are developing their military capabilities in cybersecurity, while developing appropriate military theories and strategies.

In this regard, an American military think tank recently pointed out in one of its reports that strategic war in the industrial age was nuclear war, while in the information age, strategic war is essentially cyber war.

An Anglo-Saxon military doctrine then developed a unified military strategy to integrate and combine the armed forces within the scope of military operations, including air, land, sea and information in order to achieve military objectives. The real advantage of any form of war lies, in fact, in its integration with other forms of war and cyber warfare is now increasingly used in conjunction with more traditional war strategies and tactics.

The main objectives of Cyber ​​war

In the context of information war and cyber war there are two primary objectives: the control of information, both in the sense of obtaining access to it and in that of denying access to it, and the influence on that information. The two concepts may seem vague and not related directly to war, but in reality they allow numerous strategically fundamental applications.

For example, denying access to information could consist of using cyber attacks to cause the radar of a defense system to show inaccurate or partial data. It is obvious that if a country cannot perceive the intrusion of an invader, the invader obtains a significant strategic advantage.

As for the influence factor of the information, to use the same example, it would consist of causing the radar systems to sometimes record falsified data, showing elements that are not really present. In the end, the information produced by these systems would be considered so unreliable as to be unusable, thus degrading the quality of the tactical decisions of the attacked country.

The need to prepare against these new threats

The cyber attack that has been affecting Australia in recent months has worried all western countries a great deal and in recent years, with the intensification of global tensions and the spread of increasingly advanced cyber attack techniques, there has been a rapid escalation of this type of threat.

This increase will be even more radical in the coming years, especially if we consider that vulnerabilities will grow exponentially as buildings and cities become increasingly smart and interconnected, and IoT devices are spreading everywhere among the population and in the government and military world.

In this context, it is therefore necessary for each country to enhance the cyber defense of all its critical digital infrastructures, developing innovative and adaptive technologies, such as artificial intelligence and machine learning, in order to be able to prevent data breaches or compromises of systems in real time. The clash in cyber space has just begun and countries that have adequately invested in research and development in this sector will be able to easily gain more space for political or military influence.