Telsy Threat Intelligence team observed an attack against members of the Indian government or local institutions, which uses social engineering themes as an investigation for a cyber attack or the classic COVID-19 theme.

The campaign, probably carried out via a spear phishing e-mail, starts with the opening of a legitimate PDF attachment containing a malicious URL from which to download an ISO file. The ISO file contains LNK files and a malicious DLL that executes a Cobalt Strike beacon in memory.

Cobalt Strike is a commercial penetration testing tool, which gives security testers access to a large variety of attack capabilities.

Most threat actors either use stolen/cracked versions of Cobalt Strike, or simply patch out the watermark value to disrupt attribution attempts.

Cobalt Strike’s watermark 1359593325 and the analyzed infection chain might lead one to think of the threat actor Nobelium aka APT29 due the similarities, both in components and how the target is infected as previously described by security companies Volexity and Microsoft.

Unfortunately, there is no clear evidence to attribute these campaigns to this threat actor. 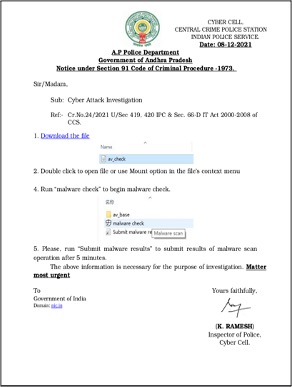 The PDF is intended to trick the user by downloading an ISO from “hxxps://www.instade.co.in/assets/frontend/av_check.iso” which is still active at the time

of writing. The domain “instade.co.in” appears to be legitimate, it uses a certificate issued by Sectigo and according to information in the Whois registry was registered in 2015.

Opening one of the LNK files causes the DLL to be executed and consequently, the Cobalt Strike beacon infects the system. The DLL is executed via rundll32.exe by specifying the exported 'InitShut()' function to be executed.

The Cobalt Strike beacon uses the same compromised domain as C2, as seen above for the ISO download. 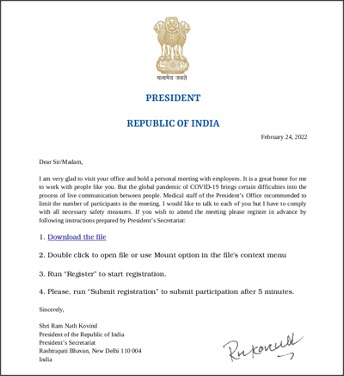 The targets of this campaign are most likely the participants of the event advertised on the Indian government portal as members of one or more of these organizations: 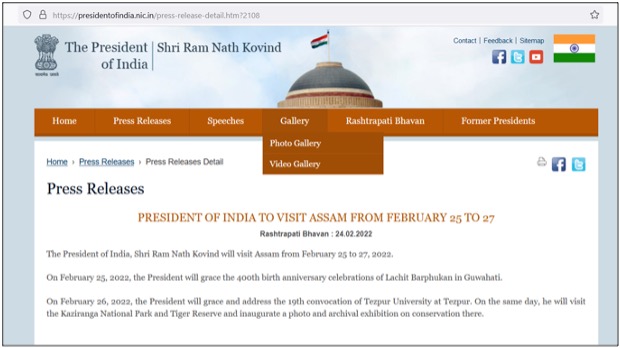 The PDF, as the previous tricks the user in downloading an ISO from the following URL hxxps://tiny.one/covid22. Also in this case the link is still up on the time being.

The downloaded ISO, with hash e2ff656f52dccc9fb70e90dc94c4fce8ab14e8ed, contains the following files:

Once the LNK file is opened the malicious DLL is run through rundll32.exe specifying the exported function named 'AwaitProperty()”.

Also in this case the DLL is a Cobalt Strike loader and the beacon has the following configuration.

The public key and the watermark is the same as the previous beacon but the C2 is the domain 'covid.comesa.int'.

The same domain hosts the ISO, with hash e2ff656f52dccc9fb70e90dc94c4fce8ab14e8ed, in the following path: 'hxxps://covid.comesa.int/wp-content/uploads/covid.iso'.

The domain appears to be compromised, as “comesa.int” is the official website of the Common Market of Eastern and Southern Africa. 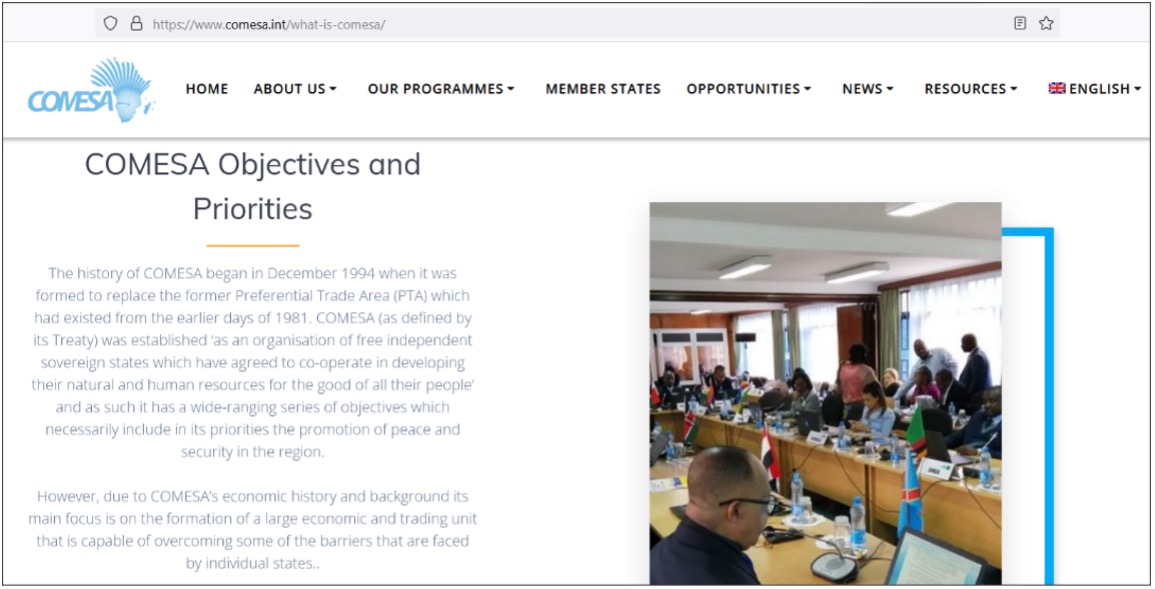 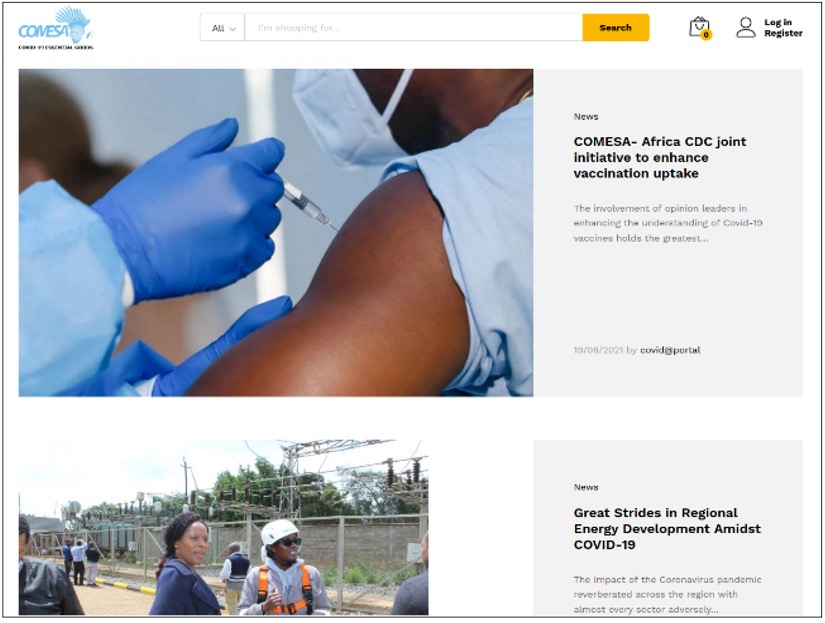 Both the infection chains ends in a Cobalt Strike loader and the DLLs are pretty the same so the analysis has been conducted on the following hash: f80ee71efcea4736b41d6ffed777ff1bb5621043.

As said, the purpose of this DLL is to load and execute a Cobalt Strike beacon, indeed the sample appears very simple, even though the author has inserted some stub call between the significant code.

The sample imports a minimum set of functions, so it needs to load at runtime libraries and APIs.

Libraries and APIs names are stored encrypted via XOR operation in the data section using a basic data structure. Every encrypted string has its own xor key stored in the same data structure.

Before, entering in the specific function used to decrypt the strings, it takes a random string 8 bytes long. 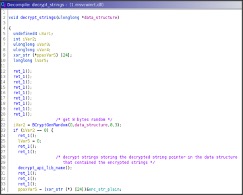 Then it decrypts the string 'kernel32;ntdll' using again the xor operator and a dedicated key. 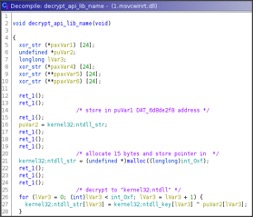 Finally, it decrypts the library name and the API name, notice how the threat actor use allocation to store the decrypted string instead of using existing space doing in-place decryption. 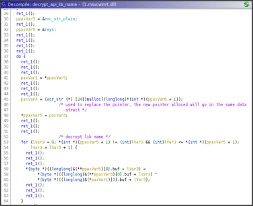 After that libraries and APIs are decrypted the strings are hashed with a custom algorithm and stored in the structure named 'data_structure'. Every hash will take 8 bytes. 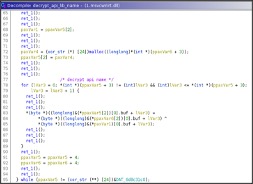 The data structure will contain all the hashes and the initial condition obtained randomically. 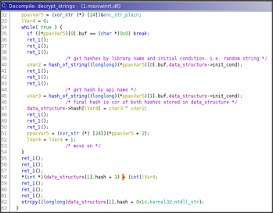 The string is hashed 16 bytes per time, the string, of course, can be of arbitrary length.

When the string is smaller than 16 bytes, it is aligned to 16 bytes adding 0x80 bytes and then setting the remainder to 0. 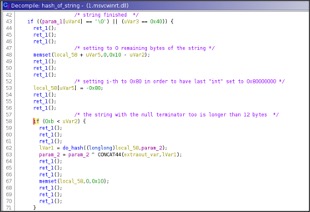 On the other hand, if the string is larger than 16 bytes the hash is calculated in chunks of 16 bytes and the remainder will follow the logic shown before. Of course the calculated hash is incremental, i.e. the hash of the n-th chunk is xored to the hash of the (n-1) chunk and so on. 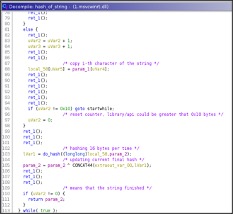 The hash is computed, starting from a generated random initial condition that according to the string value is updated multiple times in a loop and finally returned. 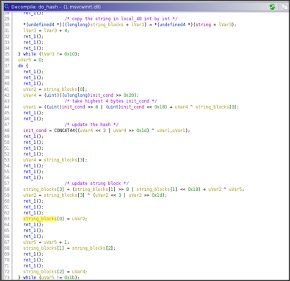 Basically, it treats the string/chunk, since it is 16 bytes long, in blocks 4 bytes long doing some shuffle and binary operation between the blocks self and the initial condition that is updated from time to time.

In particular, the final hash is due to 0x1b iteration of the hashing algorithm.

In the first for loop (line 30) the string API is copied as 4 block bytes long in an integer vector.

Then, in the second while loop the initial condition are updated according (line 48) to the string blocks and they are updated too in the same while, the code seems contorted, below a basic re-implementation. 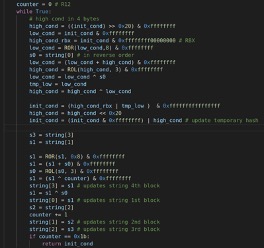 As said, the hash of every API to load are stored in the data structure then the API addresses are searched doing a basic walk into the PEB and checking the hash.

Every module and API found is hashed and compared with the hash of the API string obtained initially.

Finally, it loads all the APIs. 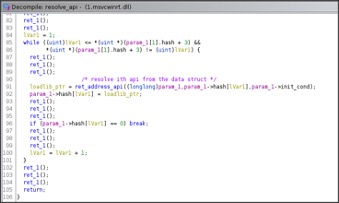 The payload is embedded in the binary using the compression algorithm: LNZT1. 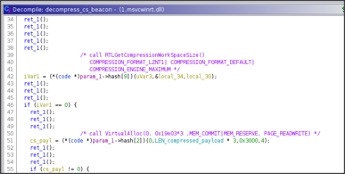 Indeed, after allocing the required RW memory using VirtualAlloc() the payload is decompressed and the pointer is returned. Then the author wanted, perhaps for greater security, to insert a further step, i.e. allocate a new memory area, equal exactly to the decompressed payload size, copy into it and execute it.

This way to write the code is not very logical nor correct.

Indeed assuming that the decompressed payload will take less of the initial space allocated there will be no problem in running directly it.

On the other hand, assuming what scares the author, i.e. decompressed payload longer than the allocated memory, the RtlDecompressBufferEX() will return an error, STATUS_BAD_COMPRESSION_BUFFER and will lead to a NULL pointer access of the code, very bad and basic error.

Another weird point is the use of the hash to resolve APIs. Usually, the hash is used to obfuscate strings and make harder analysis. Here the approach is hybrid, indeed doing a trace of the sample all the required API are uncovered due to the initial decryption step.

This behavior shows that the sample likely has been written by a not so skilled programmer or it is product of confused cut and paste of multiple code's pieces. 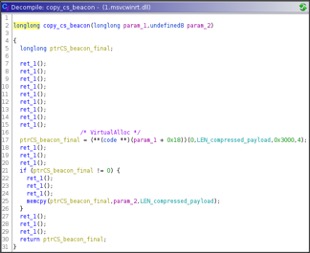 Anyway, in the end the new memory is made executable and run. 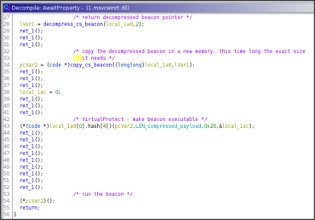 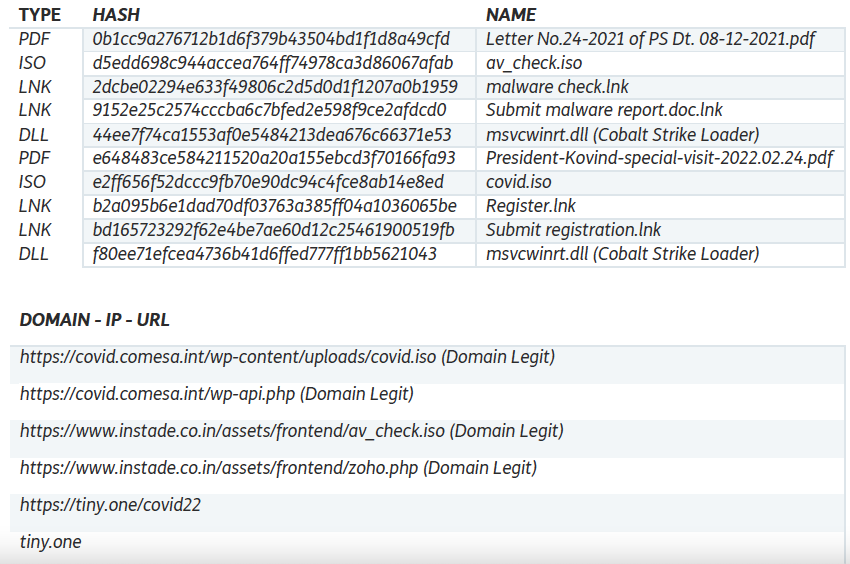 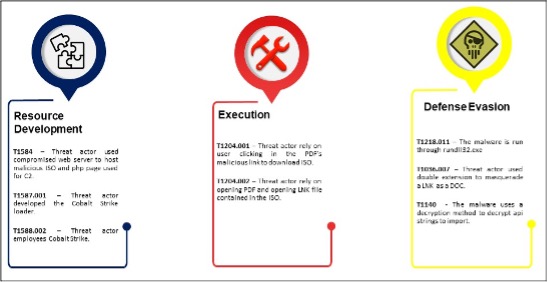